TakéDaké (meaning "BambooBamboo" or "BambooOnly")
is a group that uses only bamboo instruments, most of which weremade by group-leader Neptune.

Music has the power to move people,to touch that something that is beyond sound and silence.

Like words, music is culturally specific,and there is such an amazing variety of sounds with differentfunctions and structures that about the only generalization thatcan be made about music is to call it "organized sound".

Music is a process, not just product.People organize sounds in ways that reflect their understandingand relationship with everything. As one ethnomusicologist said,"As they sing, so do they live." I believe that throughan understanding of the performing arts we can have a better understandingbetween different countries and cultures, so important in today'sinterdependent world.

A love and appreciation of the world'smusic, especially Asian music, is part of the message of TakéDaké.Our music has been directly influenced by the great musical traditionsof Japan, China, India, Indonesia, and others. Instruments, rhythms,scales, and structure all find a unique expression in differentcultures, and provide a fertile ground for growing new soundswith only bamboo.

The bamboo used in TakéDakécomes from Japan, China, Indonesia, Philippines, Vietnam, Cambodia,India and Hawaii. By using only bamboo we hope to showcase theimportance of this flexible material in those various cultures.Called "the brother" in Vietnam and 'tthe friend ofthe people" in China, it is not an exaggeration to say thatit has a major influence on the way people live.

In the East, bamboo has always beena symbol of something for us to emulate. Bamboo is hollow, representingan "empty-mind"--without the self-identification whichleads us to see people as separate and superior to nature. Bamboois useful. Food, medicine, shelter, paper, so many things functionaland/or decorative, bamboo is an example of great generosity. Ina storm, bamboo bends, but is seldom broken. Bamboo embodies strengththrough flexibility, a quality useful for individuals and nationsalike.

Although I didn't grow up in a culturewhere bamboo plays a significant role, it has had a profound influenceon my life for more than 25 years. I am fortunate enough to makea living working with bamboo and organizing sound, and somehowI feel like it is the bamboo and sound that shows me the way.Tak6Dak4 is a celebration of the power on which we depend, themystery in which we all participate, and it is a great joy tobe able to share that energy.
-- John Kaizan Neptune

Bamboo is a truly remarkable plant.A member of the grass family, it grows faster than any other planton earth, as much as 120cm (almost 4 feet) a day. Its tremendousvitality is also shown by its wide-ranging habitat: native toevery continent except Europe and the Poles, more than 1200 speciesare found from sea level to 3600 meters (12,000 feet) in elevation.With the net-like structure of the root system, bamboo providesunequaled erQsion control, and because of the fast maturity cycle(often about four years) and high increase of annual biomass comparedto trees, it creates greater yields of raw material for use.

The versatility of bamboo is "bamboggling".It would be possible to sit in a bamboo chair, in a bamboo house,and eat bamboo shoots, cooked over bamboo charcoal, eaten froma bamboo plate with bamboo chopsticks, while listening to musicmade by bamboo instruments from a record player with a bambooneedle, in a room illuminated with a bamboo filament light bulb,powered with energy from bamboo diesel fuels. There are thousandsof ways that bamboo has been utilized, and there are new applicationsbeing developed for this renewable resource.

Basically hollow, bamboo has naturallybeen used to make many different kinds of flutes, but an amazingvariety of pitched and unpitched percussion instruments, as wellas bamboo stringed instruments and jaws harps are found in themusic of many cultures.

I have been playing shakuhachi since1971 and making the instrument from 1980. Harvesting the bamboo--diggingit up (the root portion is used), curing and drying it for about2 years, inlaying the mouthpiece, drilling the holes, shapingthe bore, and finally lacquering the inside is a demanding process,but one that is very interesting and rewarding.

Over the years I have used the shakuhachiin many combinations with musicians and instruments from differentcultures. There are a few traditional all-bamboo instrument ensembles,such as the wonderful jegog of B4li, and I had thought that Iwould like to compose some music for shakuhachi and other exclusivelybamboo instruments.

In June of 1995 I was invited to performat a festival in conjunction with the IV International BambooCongress held in Ubud, Bali. At that time I had the opportunityto see not only jegog but many other all-bamboo ensembles includinga complete Western marching band with all the instruments (includingthe tubal) made from bamboo. There were lots of extraordinarybamboo sounds, coming from great musicians. But I found that thoughthe shakuhachi could fit into many musical settings due to itsflexible pitch and sound, it was difficult to find instrumentswith the adaptability and range to play the kind of new materialI was hoping to create. 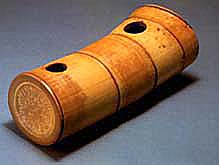 Loadedwith raw bamboo rather than completed instruments, I returnedto Japan from Bali with ideas for instruments that I would makemyself. As I began to explore various sound-producing possibilities,I had two basic concepts that were guiding my work: first, theinstruments could include material other than bamboo as part ofthe frame or support for the instrument, but the vibrating surfacehad to be bamboo. A bamboo drum with an animal skin head wouldnot be appropriate, but bamboo tubes held together with a woodor metal frame would be fine. Second, the musicians I work withwould all be professional with fantastic facility on the instrumentsthey have spent many years mastering. To take advantage of thisI have tried to create bamboo instruments that were physicallyclose to the instruments they normally play. For example the baliphoneis a bamboo "marimba" with a size and design similarenough to a normal vibraphone or marimba so that Hitoshi Hamadacan use his great four-mallet technique.

After working late into the night formany months on one failure after anoth6r, I finally began to seeresults with some help from experts in many different fields:a bamboo basket weaver helped me to make some woven bamboo headsfor the drum kit and a carpenter helped me to plane bamboo smoothand flat enough to make laminated heads for the bass and snaredrums. Saito Instruments made a metal frame for the baliphone,and I found a company that was milling bamboo into thin flat stripsI could use for "conga" drum bodies and heads. The FujiBamboo Garden introduced me to a bamboo charcoal maker (for windchime material) and also showed me where to get the largest bambooin Japan. A bamboo paper craftsman made many large sheets fortwo frame drums and a cabinet maker helped me to make and designa large stand for the bambass. My former experience in surfboardmaking also became very useful when I found that I could bindthe bamboo with epoxy-fiberglass to prevent cracking.

The first performance of TakéDakéwas in March 1996, sponsored by NHK in Oita, an area well-knownfor its bamboo products. Introducing the wide range of music possibleon these instruments, our program included Japanese folk songs,jazz, Western classical music, and original music which I composed.The response was very encouraging; everyone seemed to like thelook and the sound of bamboo!

TakéDaké continues toevolve as new ideas for instruments are investigated and difterentsound textures are explored with new compositions. I have usedbamboo from six different countries, and many different configurations:natural tubes, sticks, planks, woven mat, paper, charcoal, andmore. It is my hope that people listening to this group will appreciatethe wide variety of uses and the beauty of this amazing naturalresource. After one of our concerts a friend said, "Thankyou for making a vegetarian drum!" Yes, I too feel very thankfulfor the many unique natural flavors coming from "Bamboo Only".