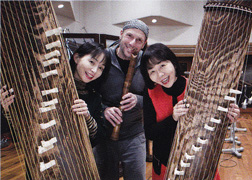 In 1994 I recorded an album of original compositions, Prime Numbers, featuring Yasuko Watanabe on koto with other traditional Japanese instruments. Almost 20 years later, it is great to record this album featuring the next generation, daughter Masako Watanabe. Many thanks to both generations for their wonderful performance and energy, and I look forward to the next project...hopefully sooner than 20 years from now!

How to Order This Recording